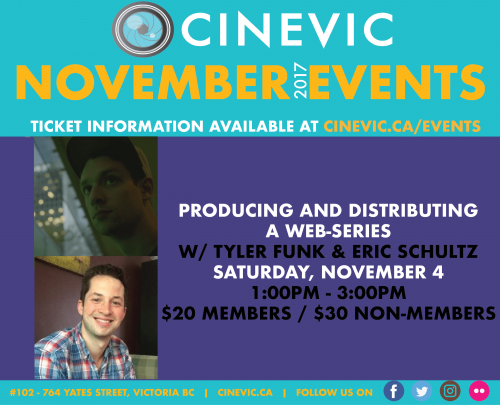 This workshop will focus on the most important part of making content – how to actually get it made!

In this case study Tyler Funk & Eric Schultz of North of Now Films will examine the process of pitching, producing and distributing a web series. There’s a plethora of funding options available to Canadian filmmakers and in this workshop they’ll share how to navigate the landscape of the funds available and understand which project is right for which platform.

North of Now has had their work featured in the Wall Street Journal, at SxSW and have garnered tens of millions of views online for their various web series (including the Canada-born White Ninja!).

Tyler Funk is the founder of North of Now (www.northofnow.ca) and an award winning filmmaker. Splitting his time between narrative digital storytelling and branded content. Tyler has directed broadcast commercials for Coca-Cola, LEGO, Ford and more, in addition his digital series have garner over 40 million views.

Eric Schultz is the lead producer/copywriter for North of Now Films (www.northofnow.ca). Over the past three years he has written and produced broadcast and digital advertisements for global brands such as Lego, Band-Aid, Coca Cola and Westin Hotels. In addition to his work with North of Now, Eric works as a producer and social media coordinator for White Ninja a hugely successful web series that, following its launch in Dec 2015, attained close to 30 million views and coverage in outlets such as the Wall Street Journal and at SxSW 2016.

***Only 25 seats are available — register in advance on Eventbrite to guarantee your spot!***