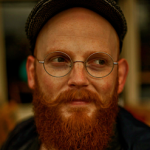 David grew up in the 80s and 90s on a Saskatchewan homestead in Treaty 4 territory, and now lives on Vancouver Island on the traditional and unceded territory of the Songhees, Esquimalt, and W̱SÁNEĆ First Nations. He holds a Screenwriting MFA from the University of Victoria and a Film & Video Production BFA from the University of Regina. His films and documentaries have been seen around the world: Queen City won the Best Documentary Award at the Canadian National Youth Film Festival in Ottawa, and his followup docudrama Stubblejumper appeared at several festivals including Inside Out in Toronto; both were broadcast on OutTV. He received NFB support for the short film Basin which screened at dozens of festivals including Hot Docs and WNDX. Recently he directed the Back to the Land episode of OutTV’s Leo Award nominated documentary series OutSpoken, and the canine companion adventure film Bark to the Land starring Data the Boston Terrier. David has taught Screenwriting at UVic, served as programmer/curator for Short Circuit Pacific Rim Film Festival and the National Student Film Festival (now the Living Skies Student Film Festival), and spent nearly a decade as Festival Coordinator for Queer City Cinema Film Festival and Performatorium Performing Arts Festival. He has also worked with several non-profit organizations including Saskatchewan Filmpool Cooperative, U of R Pride Centre (formerly GBLUR), Victoria Car Share Cooperative, and Modo Car Share Cooperative. 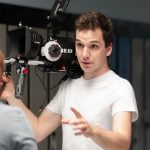 Daniel has over 15 years of experience and over 50 credits as a Director of Photography. He's had multiple award nominations and received a Leo Award for his work on the short film Encore. Some of his Victoria-shot films include the features All-in Madonna, Open for Submissions, and The Devout. While working as a Director of Photography, Daniel has been the Equipment Manager at CineVic for more than 10 years, where he oversees the expanding equipment inventory and rentals.