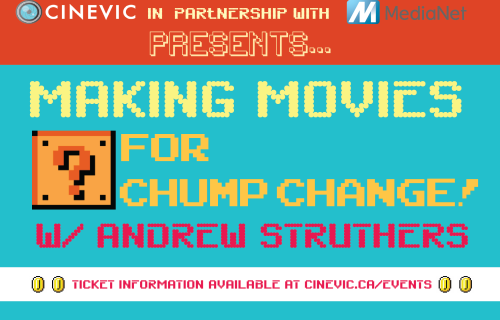 *** Presented in partnership with CineVic and MediaNet ***

Join filmmaker Andrew Struthers for this two-day workshop that covers the entire journey of filmmaking, from the flashbulb pop in your head when you first conceive of your masterpiece to the moment the lights dim at your favourite film festival and the opening credits roll. Best of all, Andrew will explain how you can pay for the entire trip with cab fare.

Learn from experience: Andrew launched his film career by making the YouTube classic Spiders On Drugs (https://www.youtube.com/watch?v=sHzdsFiBbFc) for $300, and last year created the music video for Sarah McLachlan’s song Monsters (https://www.youtube.com/watch?v=eqSt-CgGqhU) with a production budget of zero so that he could pocket the considerable fee he was paid and blow it on rent and other frills!

With Andrew’s techniques you can learn to storyboard, write, workshop, shoot, edit and distribute your film for less than it costs to buy Americanos in the lobby of the Vancouver Film School. Whether you want to shoot on film or digital, you can shoot for nothing with sage council from the Baron of Bargain Basement Filmmaking! Seating is limited so reserve now.

Day One (Saturday, October 28): Prep is Half the Job. Start with idea generating, on to storyboarding and animatics (animated storyboard with soundtrack), and end with shooting.

Day Two (Sunday, October 29): Finishing the Job. Start by wrapping the shoot, dropping the footage onto the time line, editing, output and distribution via the festival circuit and/or YouTube.

PLEASE NOTE THAT THIS IS A 2 DAY WORKSHOP. SEPARATE TICKETS ARE REQUIRED FOR EACH DAY. PLEASE DOUBLE-CHECK THAT YOU ARE PURCHASING A THE CORRECT TICKET FOR THE CORRECT DAY.