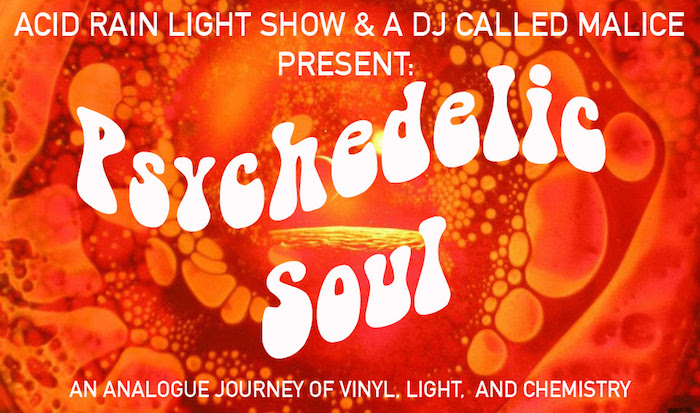 The last Friday of every month is dedicated to hanging out with you! Come on by to talk shop or just chill out with your filmmaker friends. Free and open to the public.

This month the CineVic Lounge will be infused with Psychedelic Soul — music by A DJ Called Malice and an Acid Rain Light Show. Time to get groovy, CVer’s!
RSVP on Facebook

Psychedelic Soul is a collaborative project presented by Acid Rain Light Show and A DJ Called Malice. The concept is a cohesive audio visual presentation that explores a genre of Black American music pioneered by artists like the Temptations, George Clinton, The Chambers Brothers, etc… Combining the emotional realism of Soul with gritty political outlooks and “EXPERIENCE”, expect to move your feet and expand your mind with Psychedelic Soul!

A DJ Called Malice is Victoria DJ, filmmaker, and musician Bryan Skinner. He has curated the music for Psychedelic Soul from his collection of Soul/R&B/Funk vinyl 45s and LPs, and has sought out rare tracks for this project. Avid scooterist and family man, he can be found spinning Northern Soul, R&B, and Modernist classics around Victoria’s pubs and in his garage.

Greg Evans was a motion picture projectionist from the late 70s until 2003, running every commercial format from 16mm to Imax 3-D. His Acid Rain Light Shows started in 1974 when he noticed all the classic psychedelic light shows had begun to disappear. Unwilling to see this distinctly 20th Century art form become extinct, Greg began to collect to gear needed to do them himself. He has worked with luminaries such as Wavy Gravy, The Country Joe Band, and Eric Burden and the Animals.