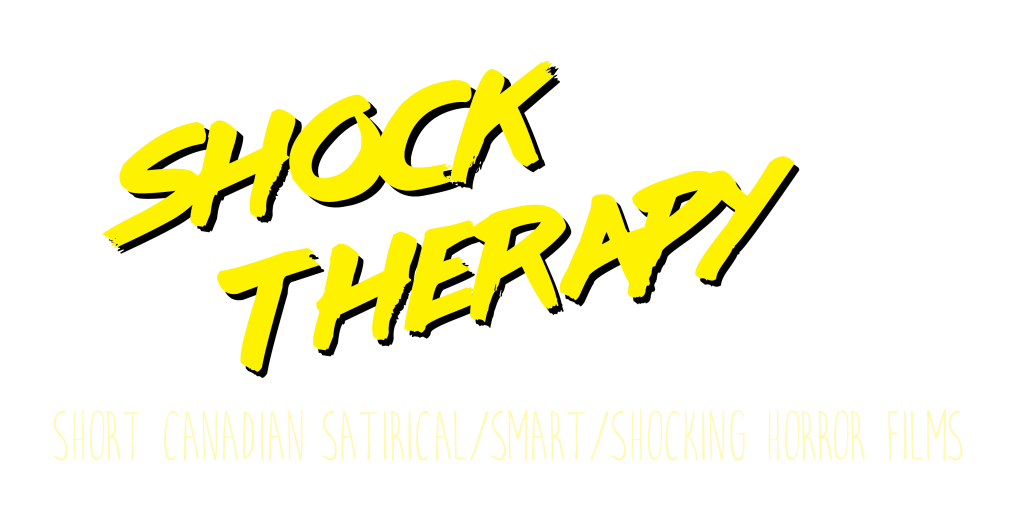 Shock Therapy: Short Canadian Horror Films is the 2018 short Canadian horror film event presented by CineVic Society of Independent Filmmakers. In its premiere year, Shock Therapy illuminated the best of Canadian short horror films, with a focus on the creative, satirical, and psychological.

“Horror films are too gory… They don’t have any story… They’re offensive…” As with any other genre, cheap or violent versions frequently get pushed out by big studios, but it does not mean the entire genre is tainted because of a few bad clichés. Writing off horror films as an artistic medium because of schlocky torture-porn movies would be like discounting documentaries because of the self-professed flat Earth experts on YouTube! This October, CineVic Society of Independent Filmmakers aims to prove that horror is alive and full of braaaaaiiiinnnsss…

Shock Therapy will have two screenings: “Laugh Yourself to Death” which is full of horror comedy and "horror-lite" shorts, and “Can’t Look Away” which will be full of scarier shorts and is intended for a more mature audience. Read more about each screening in the screening section below.

Screening One will showcase a variety of "horror-lite" shorts, ranging from comedic to bizarre and beautiful, and back again! This screening is rated 14A.

Screening Two features a collection of gritty, shocking, and eye-opening shorts. The one thing that these shorts all have in common is conflict with monsters -- both real and psychological. This screening is also rated 14A.

A blood splattered horror-comedy that knows relationships can be messy, and sometimes a new coat of paint is needed to fix it.

After losing his wife and son, John became a recluse alcoholic haunted by his past. One night, a monster pays him a visit.

A strange Romanian trying to enter Canada is confronted by an overzealous custom officer and his curiously cooperative colleague.

Sofie and Dennis need an affordable place to live that will allow their two dogs, and are forced to consider one inhabited by an unwanted guest.

A man is haunted by his cell phone and things take a nightmarish turn.

Lindsey is forced to babysit her sister, Becky, one night, when, after innocently falling asleep, wakes up to find her sister gone. Someone may have taken Becky and could be after her as well...

A shy teenager falls in love with the strange new girl at school, who always wears a mysterious red backpack.

Wanna-be-Instagram-famous Opal talks about life with her slightly odd roommate Cassandra. It really is hard to find cheap rent these days.

Set in the 90s, FWD follows two twenty-something women who face the consequences of not forwarding on a chilling chain e-mail.

BESTIA follows the lone survivor of a disaster as he awakens on a deserted beach. It becomes clear that there are more dangers lurking in the woods than a hungry beast.

After a mysterious incident, Sam goes desperately in the search of Laura, following the lead of the person who took her away from him.

A woman arrives at an AirBnB which holds a horrifying secret.

A man finds himself caught in a precarious situation between two women when his web of lies unravels. A short film with shades of noir, suspense and horror.

A woman wakes up bound to an altar, helpless as she is transformed into a flesh and blood statue of Santa Muerte by two elderly Brujos whose sole purpose is to conjure the anti-Christ into our plane of existence.

It’s the summer of 1937. Something is living in the corn field. Young Ida doesn’t know what it is, but it seems to understand her better than anyone else on her uncle’s farm.