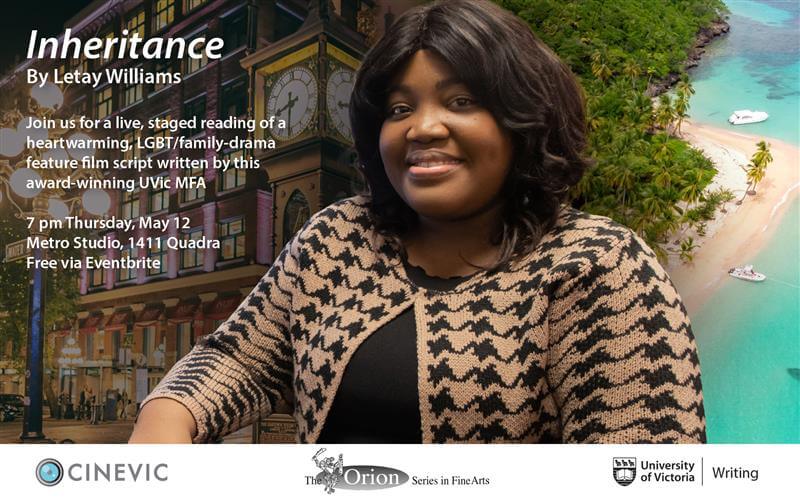 Letay Williams is a screenwriter from Kingston, Jamaica who shot her first short film ENCOUNTER on a cellphone, and won third place in a mobile filmmaking competition. Her next project WHEN A MAN LOVES & LIES was an official selection in the GATFFEST Film Festival in 2019. That same year, she pitched and won funding for her film TRAYTOWN at the Jamaica Feature Film Lab’s Pitch Competition, and came away Audience Choice award winner at the Creators of Colour – Big Pitch at TIFF. With a BA in Literatures in English and Film from the University of the West Indies (UWI), Letay’s passion for writing has earned her multiple awards. She is intentional about creating stories infused with the diverse, vibrant culture of her Jamaican heritage that resonate with a global audience. She is currently an MFA in Screenwriting candidate at the University of Victoria in British Columbia, Canada, and is one of eight writers selected for the 2022 BIPOC TV & Film Episodic Writers’ Lab.

CineVic acknowledges and respects the long and ongoing history of the Lək̓ʷəŋən-speaking people, now known as the Songhees and Esquimalt Nations, as well as the W̱SÁNEĆ First Nation, on whose traditional and unceded territory we carry out our activities. CineVic gratefully acknowledges the financial assistance and support of Canada Council for the Arts, Province of British Columbia, British Columbia Arts Council, and the CRD Arts Development Service.