The One Take Super 8 Event began in 2000 in Regina SK, and since then it has inspired the creation and screening of over 1,000 films in 50 locations around the world! Purchase your advance tickets now for the screening event on April 5th, 2019!

See the premiere of new Super 8 films created by:

What does “one-take” mean?

• Participants are given one 3-minute roll of Super 8 film.
• Some filmmakers may choose to film their movie in one continuous shot, while others may prefer to shoot scene-by-scene in proper order.
• No editing and no re-takes!
• No peeking! Filmmakers will see their finished film for the first time along with the audience at the community screening! 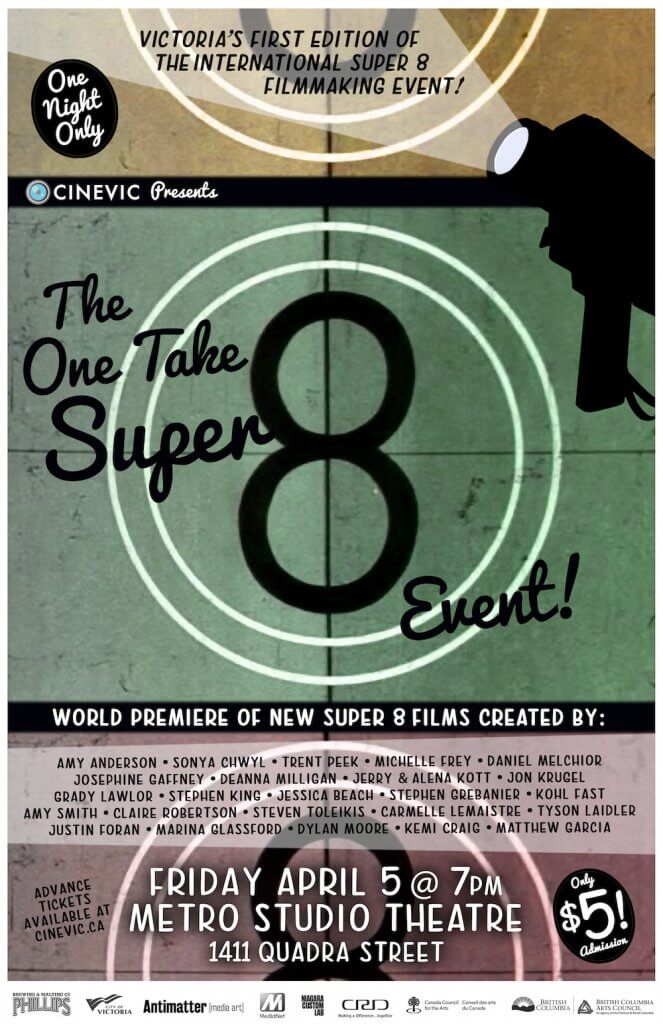 CineVic acknowledges and respects the long history of the Lekwungen people, specifically the Songhees and Esquimalt Nations, on whose traditional and unceded territory we carry out our activities.

Many thanks to our event partners:
MediaNet / FLUX Media Gallery
Antimatter [Media Art]

Many thanks to our event sponsors:
Niagara Custom Lab
Phillips Brewing & Malting Co.

CineVic gratefully acknowledges the financial assistance and support of the City of Victoria, Canada Council for the Arts, Province of British Columbia, British Columbia Arts Council, and the CRD Arts Development Service.