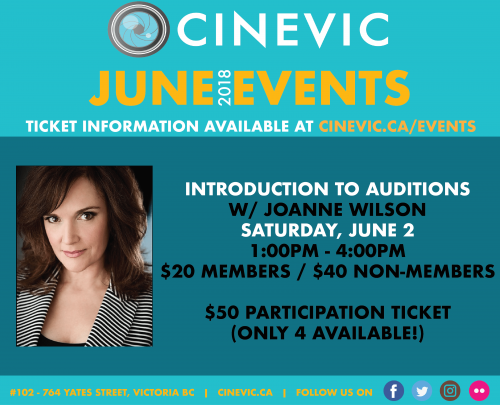 Victoria has seen an increase in both indie locally produced independent productions, as well as films and TV shows coming in to film on the island. It’s an exciting time to step into the world of film and screen acting, but how do you go about it?

Joanne Wilson, veteran actor and acting teacher (VAD Arts, Screen Actors Studio), is offering a 3 hour workshop on June 2, 2018. This workshop will introduce you to some of the basics of auditioning for film & TV; how to slate for the camera, how to act with a ‘reader’, and how to quickly find an objective and create relationship within the scene. She’ll also offer a few tips on how to deal with those auditioning nerves!

We are offering 4 special spots for participants that want to work directly with Joanne on camera, and 20 places for auditors. There’s much to be learned from watching people step up in front of the camera! So, join us and let this be the year that you take the first steps into the world of film and screen acting!

Bio: Joanne Wilson has appeared in such films as: I She Made Them Do It, Tron Legacy, Kill For Me, Cascadia, The Mermaid Chair, Stranger with My Face, Trophy Wife, Whispers and Lies, Cross Roads, and Augusta Gone. Her TV credits include: Motive, The Intruders, Arrow, The L Word.

In theatre, Joanne received outstanding reviews for her portrayal of Amanda Wingfield in the Tennessee William’s classic The Glass Menagerie for Blue Bridge Repertory Theatre. Joanne has also appeared on stage at The Citadel Theater, Chinook Theatre, Workshop West, and the Chemainus Theatre Festival, among others.