Thank you to all that attended CineVic’s 2nd annual (3rd ever) Film Festivus! This year’s Festivus was a true feat of strength, as all entries were completed in 72 hours. While we would like to congratulate the three teams that won, each team that entered should be proud to have completed a film under such tight time constraints. 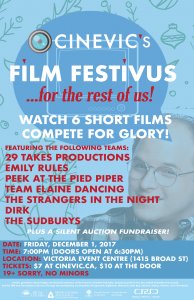